The story behind My Lady of the Smile

One of my favorite subjects has always been abandoned cars.
That day I was traveling headed Austin when I saw a crashed car abandoned along the way. If I remember well it was an old Plymouth, no clue about what's happening to the driver.
I thought it's weird, he had have traveled from New Orleans till crash on this tree... and with the first shot, I saw her.
She was laying on the dashboard, under the windscreen. She seemed unharmed but stained with blood (you have to look at the picture very carefully)
As I always loved black cats as I'm alone now, I thought: "maybe, if she came with me could keep me company and bring me luck".
and here we are
She has become My Lady of the Smile in that way

Representation of the reality 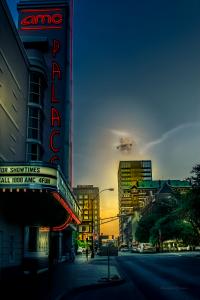 Everyone expected that a photograph could be a representation of the reality...
Why? The reality doesn't exist!

Like an "eyewitness". Nothing is more unreliable than an eyewitness, the brain interprets what he believes may be plausible.
I do not doubt if yesterday you met your father died twenty years ago, spoke with Jesus Christ or make love with an alien, that's it's true for you.
The tragic thing is that an eyewitness, although abolished into scientific experiments, is still accepted as evidence in the courts.
My pictures are real for me, I tried the best representation of what I felt at that moment.

There Are two worlds, one is shared with everybody and the other one is inside yourself. You become absent minded when the second became bigger, we called loneliness this condition when the communication to external world is getting poor.
This old headphone with ripped wires is the metaphor of loneliness: the end of the line - no one is listening to you, you are prisoner of your own world because the connections were ripped off.

It is a Button

Hey 21 century's man... even if you live in splendid isolation, alone in the desert, this probably is your best friend.
May you gently touch or strike it with ardor for any possible reason. It can do practically everything, on the device or on the remote, to leave, to go up, to warm to illuminate have to flip the switch
Your best friend it's a button.

Just for fun... or maybe not.
I'd like to explain how the most stupid thing could have a real meaning.
Everyone know something about the Vitruvian Man, a drawing by Leonardo da Vinci, a man in two superimposed positions with his arms and legs apart and inscribed in a circle and square for represent how the human being the principal source of proportion among the classical orders of beauty.

I asked to myself, what's about the human today? He cannot stand up, so the sitting condition doesn't fill the circle.
What's about his way to look? He cannot looks forward, his eyes are stiff on the mobile phone.
The square lose its shape, we cannot expose the body naked and it's better to cover the hair as well.
I called Vitruvio this nowadays man, just for fun!

The Bible still on the dashboard

For Darrel Leight no stunt was too dangerous, no challenge too awesome, he always lived close to the edge. A thrill seeker like him deems any risk acceptable but, no one know if has been the speed, the border barrier or the bullets to kill him.
Now the wreckage of his car sits in the graveyard of the vehicle inspection depot, glass from the shattered windscreen glittering in the sun... and the Holy Bible is still on the dashboard.

Maybe the adult eyes distorting the reality, disillusionment signs our days. I'd rather see the world through the eyes of a child. They have an innocence about them that is genuine and very real. It seems as you grow into adulthood you lose that innocence and once you do it is gone forever... it's not for me

This work was made with metal shreds of old cars.
I don't wanna say what is, and everybody would say "America" but is a clear and representative idea of a shared feeling, metal, sheet, rust and screws... they're screaming and everyone is listening according to his own way.
This is my message, different for everyone.