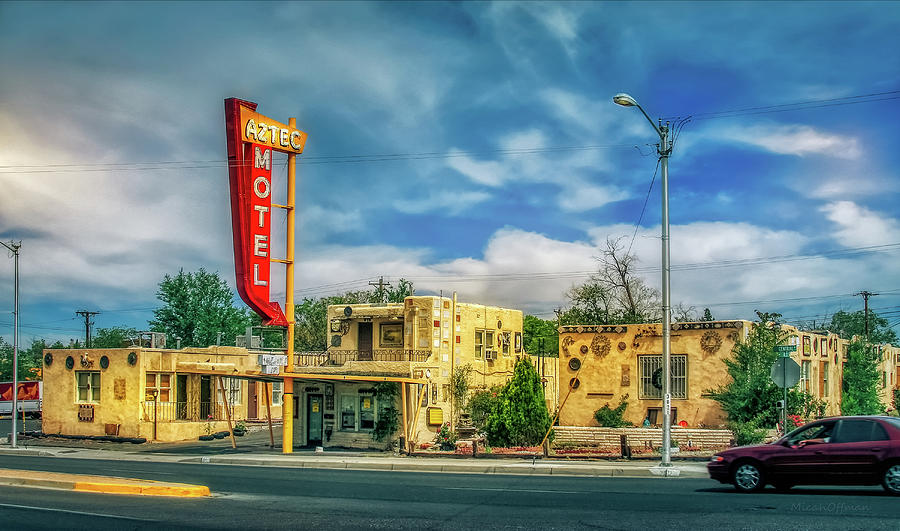 The Aztec Motel, a real piece of American history, was demolished in 2011, I managed to take this shot just a week before.
(from Wikipedia)
The Aztec Motel was built in 1932 as the first of what would eventually be dozens of auto courts lining Central Avenue, which became U.S. Route 66 4 years later.
It was listed on the New Mexico State Register of Cultural Properties and the National Register of Historic Places in 1993. The building was well known locally for its exterior decorations, which consisted of hundreds of found objects assembled in the 1990s by a resident of the motel. The work was described in the Albuquerque Journal as a "beloved local folk art installation".

In 2003, the Aztec Motel received a fund from the National Park Service Route 66 Corridor Preservation Program to restore its neon sign.
The Aztec Motel was razed in early June 2011. The motel's owners cited its deteriorating condition and high maintenance costs as reasons for the demolition, estimating the building would cost $1 million to renovate.

CONGRATULATIONS your STUNNING image has been FEATURED on the HOME PAGE of SHOWCASING THE SOUTH GROUP! Thank you for participating in the group. Please add this to the discussion 2020 “FEATURED IMAGE ARCHIVE THREAD.” L

A splendid, historic image with such a tragic backstory! l/f

Thank you so much, Dorothy!

BRAVO! Your excellent artwork has earned a FEATURE on the homepage of the FAA Artist Group No Place Like Home, 2/17/2019! You may also post it in the Group's Features discussion thread and any other thread that fits!

The New Mexico Land of Enchantment Group is honored that you chose to submit your work to the group and we are proud to feature your magnificent image on the Homepage in the Featured Images.

Congratulations! Your fantastic photographic art has been chosen as a Camera Art Group feature! You are invited to archive your work in the Features Archive discussion as well as any other discussion in which it would fit